Transformers: Revenge of the Fallen is perfectly mediocre. In fact, if I hadn't been testing Dolphin I would have never bothered with it. For some reason I ended up beating this game in Dolphin over the course of two days so now I get to complain about it.

Shoveled onto the Wii

Some games are brilliantly designed for the Wii and take advantage of what it can do. Wii Sports Resorts is a game that I had to hook up a Wii in the living room for her to play occasionally for years. And who wouldn't hop in for a quick game of bowling every now and again? It was family event, and everyone enjoyed it.

Shovelware on the Wii usually consists of developers who have no idea how to use the Wii Remote trying to use it for things it cannot do. Transformers: Revenge of the Fallen isn't the worst kind of shovelware - it's just a lackluster port for the most part, but it decides the Wii version of the game has to use infrared and motion controls for everything it possibly can. And this game gives you no option to use the classic controller for a more traditional control scheme.

Transformers: Revenge of the Fallen is one of those special games that use separate motion controls for both the Nunchuck and Wii Remote. This is particularly annoying because the Nunchuck is plugged into the Wii Remote so when you try to swing the Wii Remote to attack, the extremely sensitive Nunchuck dodge controls kick in and you end up rolling into the enemy so they can hit you instead of you getting to melee them!

The pointer aiming works well enough at first glance, but the games linear nature quickly betrays you. For the most part, enemies only spawn in front of you so this isn't an issue if you kill everything as you go. But this game has a weird lock-on system (probably controlled by a button on the Xbox 360/PS3 versions) so if you had enemies both in front of and behind you, sometimes you'll have trouble attacking the threat you want to hit. 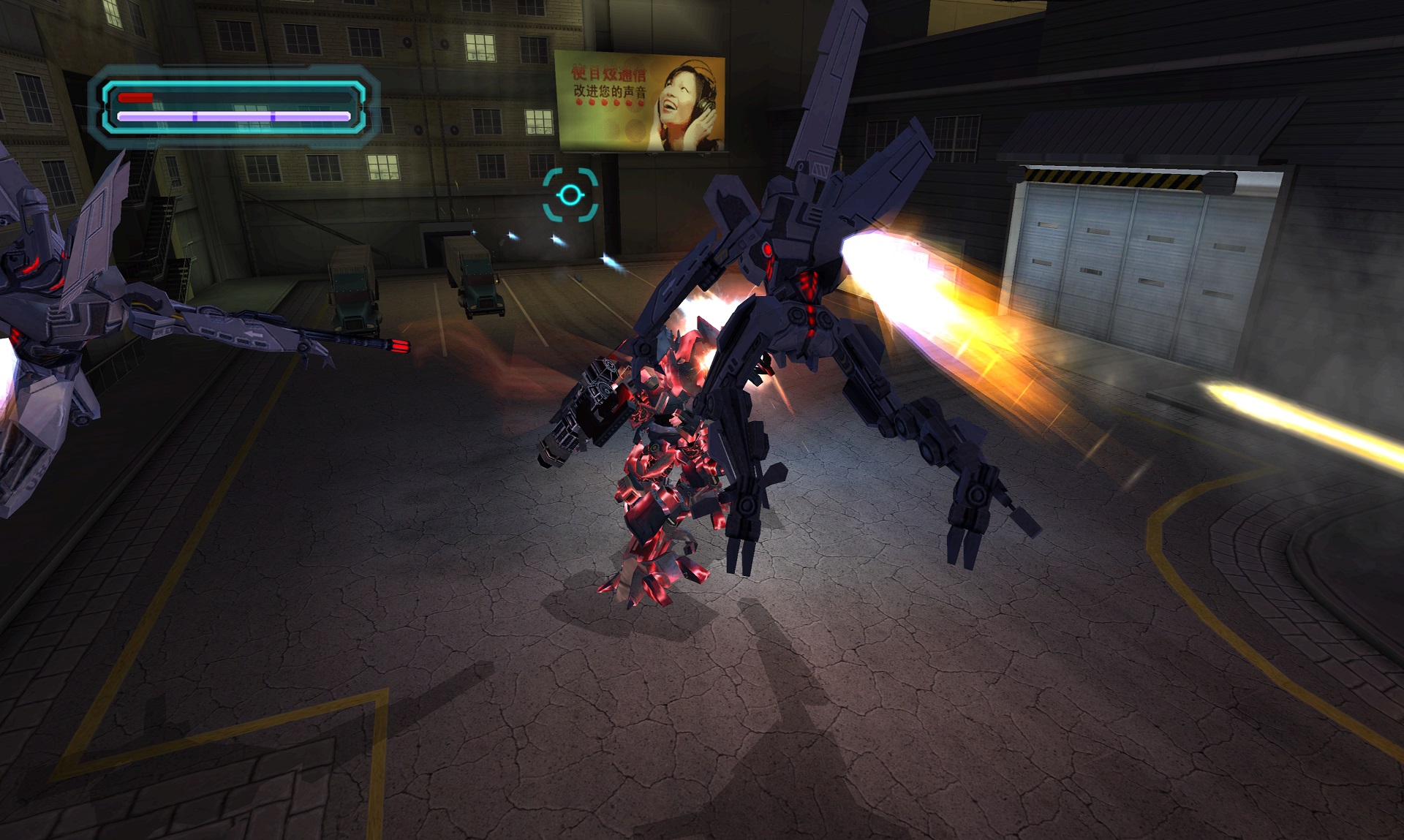 When flooded with more enemies, aiming behind you can be an issue thanks to the camera.

Dolphin's emulated Wii Remotes can make things easier if you very carefully customize them for what this game needs. In order for nunchuck commands to work correctly, you need to use 5.0-8443 or newer. This feature wasn't available when I was playing this so I opted for USB Passthrough with soldered Wii Bluetooth chip via USB. This let me use a real Wii Remote/Nunchuck with identical behavior to a real Wii.

Also, I have to mention that between every third person shooter segment there tends to be a really drawn out on-rails segment. Whether it's Starscream flying around an arctic base of Optimus Prime falling out of a plane they tend to be too easy and way too long. 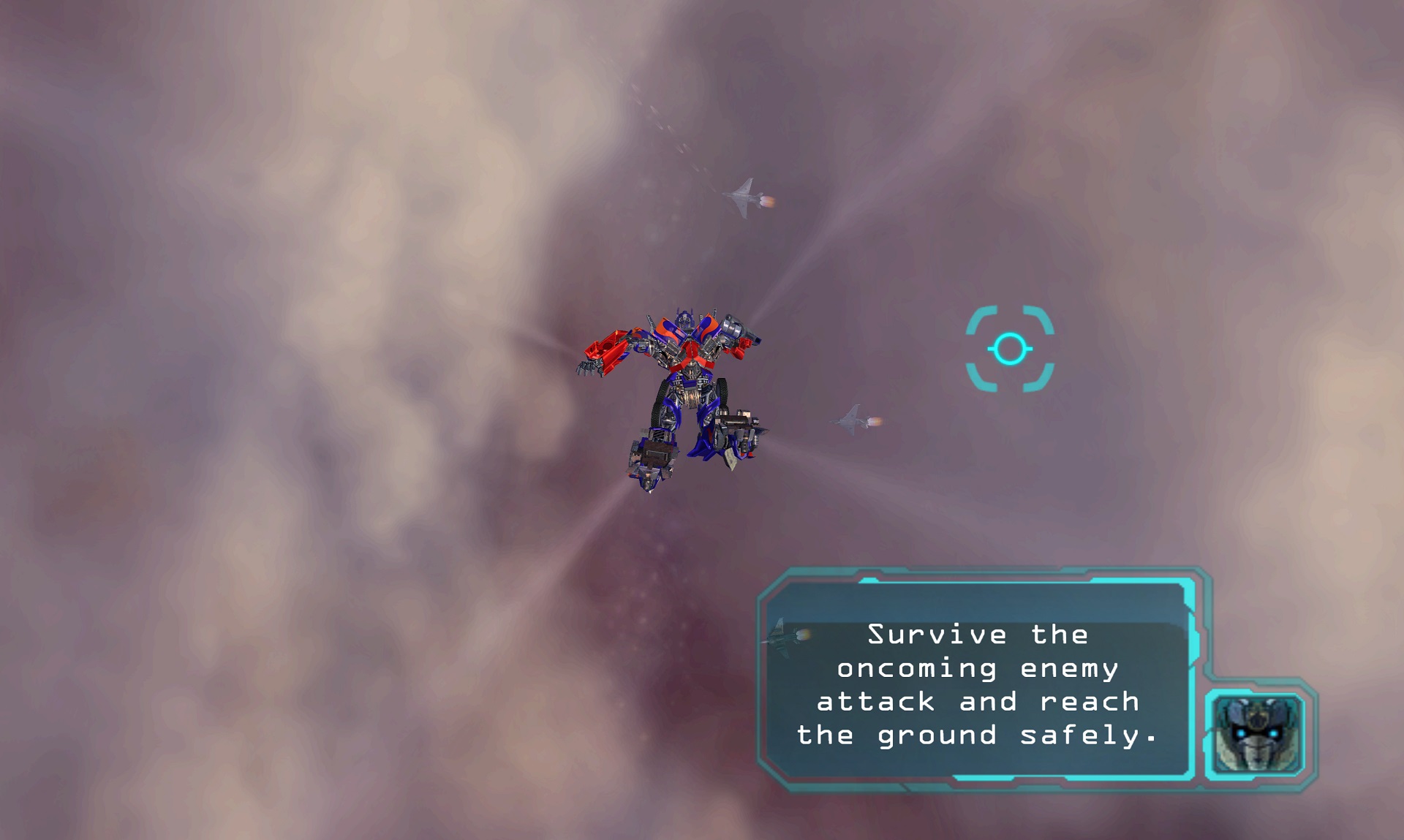 Ah yes, an on-rails shooting gallery, the best first impression for every experience.

Getting attached to the character you're playing? Now kill them!

Note: Potential story spoilers to the movie if it's based on this shitty game at all.

The story is a mess. You constantly swap between various characters. In one very annoying scene, you trudge through the city as an autobot (good robot) chasing a decepticon (not good robot), and right as you catch them, it switches perspective. Now you're playing as the decepticon and have to escape. Thanks for the whiplash.

I haven't seen the movie, but I've read enough about it to know the story isn't exactly well loved. In a video game, it's really hard to get attached to particular characters if you're constantly switching characters and having to fight them. Any potential tension in the story is ruined as you're playing both sides of it. It sucks. The opening level has you start off as Optimus Prime and then abruptly change perspectives right after a lengthy on-rails shooting gallery. Even at HD resolutions I can't tell who I'm playing as... 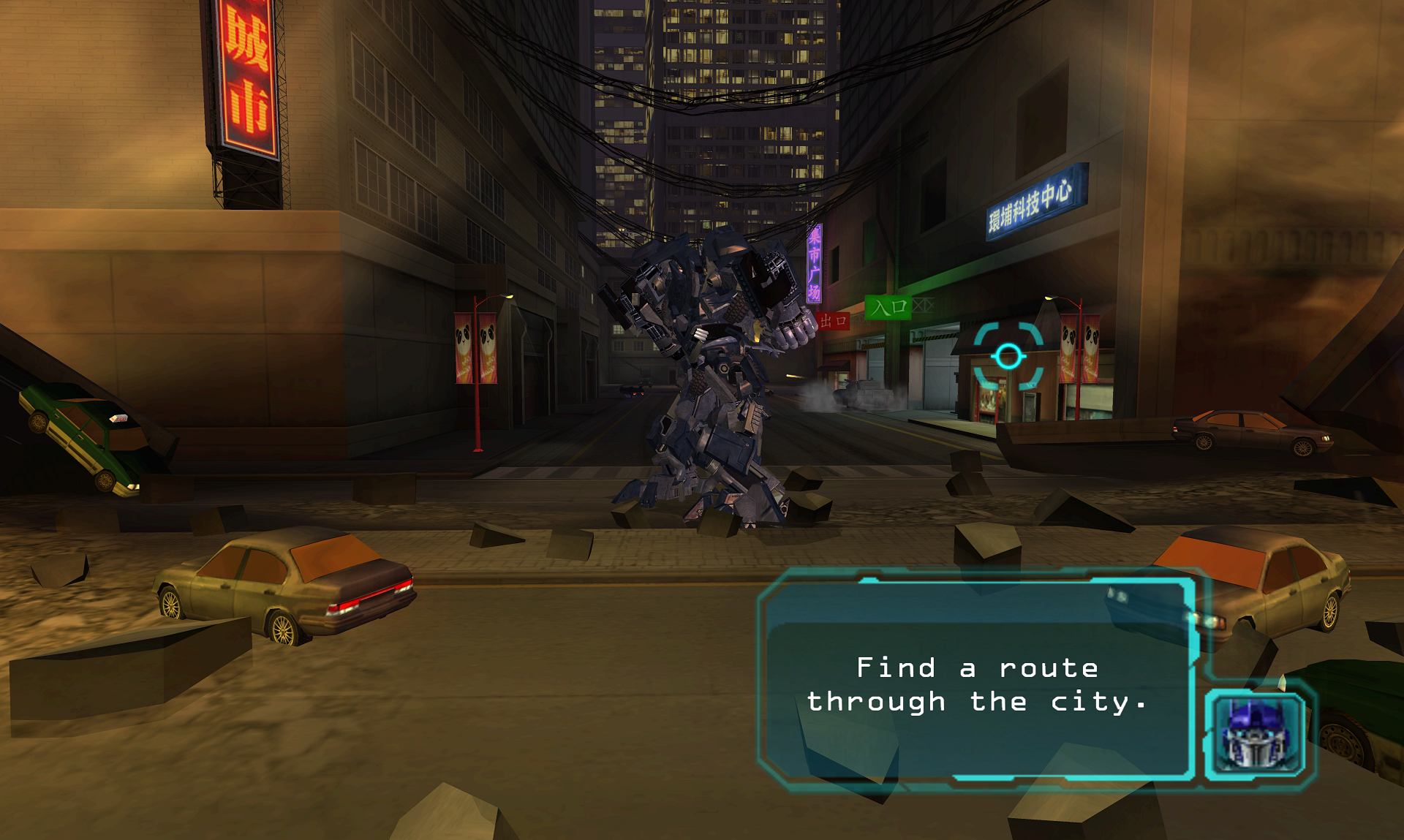 Based on the level name, I think this is apparently Ironhide?

The worst case I've seen is that you have to fight through this GIANT (~90 minute) long stage as Bumblebee (autobot guy) and then at the end, you switch to Megatron (main bad guy) and go to fight Optimus Prime (main good guy) who you played earlier. It can be a pretty cool thing to play as the main bad guy and defeat the good guys, but here it comes off as annoying. I didn't go through that whole base just to switch sides at the very end!

This boss battle is terrible. It's very annoying and drawn out after going through a 90 minute level that was mostly just clear rooms of enemies to open the next door. Your attacks do almost no damage to him, he recovers health midway through, and you die very fast to his attacks. Thankfully you respawn at the midpoint of the battle if you die on the second half, but it still can be hard!... Until you realize you can infinite combo poor Optimus Prime.

So after all of this, you're triumphant over Optimus Prime. So what do you do? Monologue over his dying body and... leave. Guess what, Bumblebee is able to rescue him because YOU LITERALLY JUST LEAVE HIM THERE.

I hope that was in the movie because it's honestly so bad it's hilarious. I get the trope of not checking to make sure the good guys are dead, but I've never seen it done so blatantly and so stupidly.

Emulation of the Fallen

I played this game on three separate computers in an attempt to make it run better. I started out on my i5-3570K paired with a GTX 760, but, performance was bad with my preferred settings. Sure, I could have turned on Dualcore or something like that, but, I'm testing a game. I want determinism and stability, not the chance for a random crash.

Out of curiosity, I also ran it on an i7-7700HQ, where it ran full-speed for the most part (demanding scenes would dip to ~76%) while making the fans scream. I eventually ended up doing a majority of the playing on my bigger gaming computer. The i7-6700K erases most of the slowdown and makes the game run really well despite me not using dualcore. But it begs to question, why is this game more demanding than games like Super Mario Galaxy and even Xenoblade Chronicles? Does it require Storing EFB Copies to RAM? Nope. Does it have really strict GPU timings? Nope, in fact, this game is perfectly stable on dualcore! Does this game require MMU emulation? Nope. This is a perfectly vanilla Wii game.

The reason why Transformers: Revenge of the Fallen is so slow is that Dolphin lacks proper GPU timings. On the Wii, the game is a shitty port of a Playstation 3/Xbox 360 title that used those more powerful consoles to push a higher framerate and polygon count. Instead of making a special Wii version, they just ported it over cheaply, cut out any effects they couldn't figure out, and let the framerate suffer dramatically. The game often drops to 10 FPS during action sequences with lots going on when playing on Wii!

Dolphin doesn't have GPU timings though, so, it sees all of these polygons and just pushes them right through. That's right, Dolphin will run a solid 30 FPS regardless of what is happening on screen! This actually makes the game a lot more playable on Dolphin - if you have the processor to handle it. My i7-6700K had a few framedrops here and there, but that was godsend compared to the absolute slog it was to play on Wii. Just deal with the framedrops in Dolphin and turn on audio-stretching if you must.

And remember that Dolphin supports higher internal resolutions. 480p on Wii makes the game's assets hard to appreciate where as Dolphin lets you see some very muddy textures at high resolution mixed in with some decent models here and there. As a note, FMVs start having small issues at 5x IR or higher, so you may want to keep the resolution to 4x IR or lower. 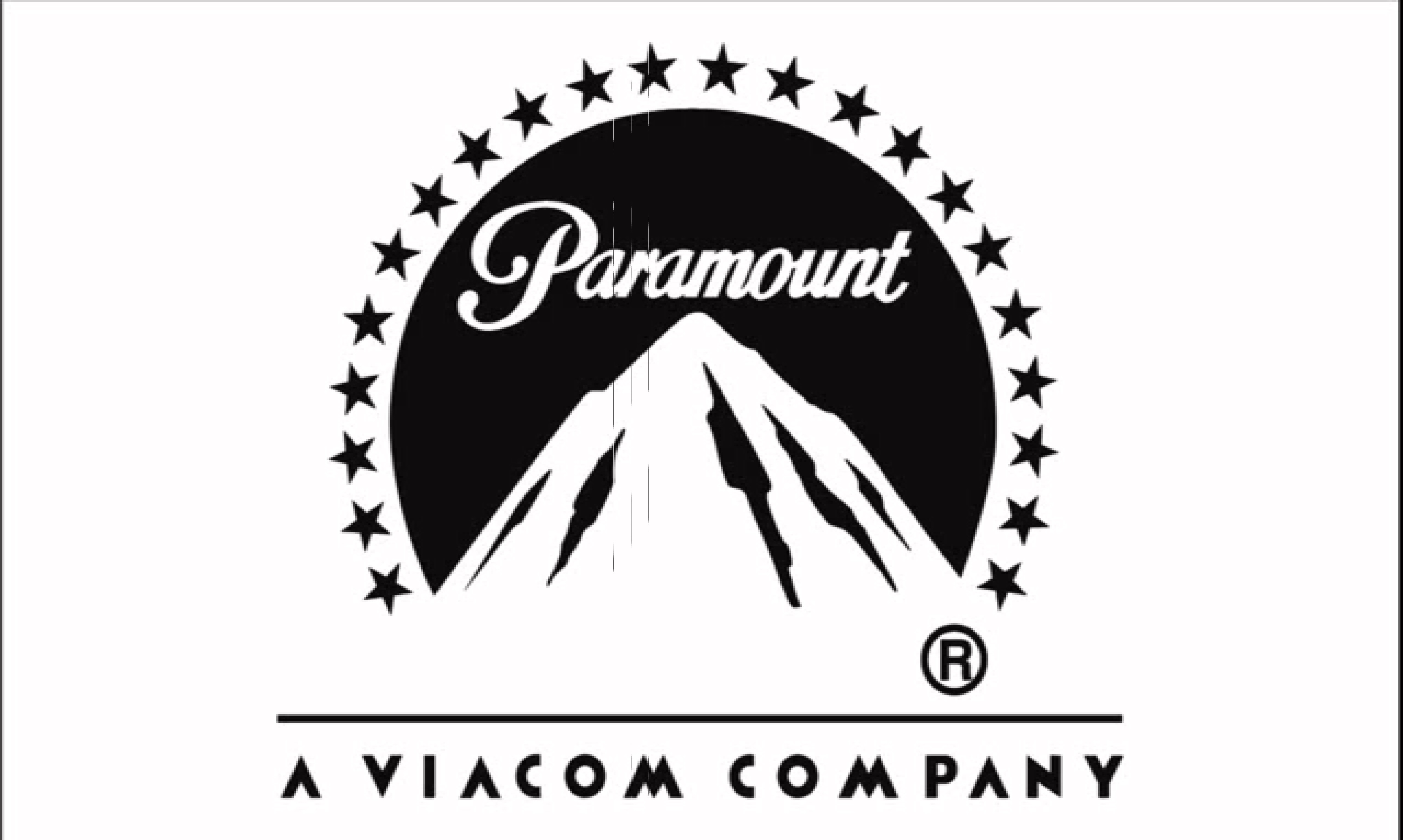 Slight FMV corruption is the only bug I found, and that only happens at higher internal resolutions.

If you want to make the game lag more like console, you can set the Emulated GPU Clockrate to ~17% and that'll make it somewhat like console. Note this number is arbitrary since Dolphin's GPU timings are so bad, and hopefully going to be different someday in the future.

This was actually one of my more expensive shovelware experiences at $7 plus tax. Transformers: Revenge of the Fallen is a 7 hour story with the main campaign full of annoying segments and little fun. The two player mode is a simple arena that you won't enjoy either.

I've played a lot of shovelware in my day that is worth buying for some reason or another: Maybe it has hilarious box-art, poor writing, terrible art assets, a weird premise, or is outright broken in amazing ways. Transformers: Revenge of the Fallen plays it safe in every way and ends up so much worse because of it.

With little play value to begin with, suffice to say there's no replay value. Even at the cost of "free" I'd recommend avoiding this game. 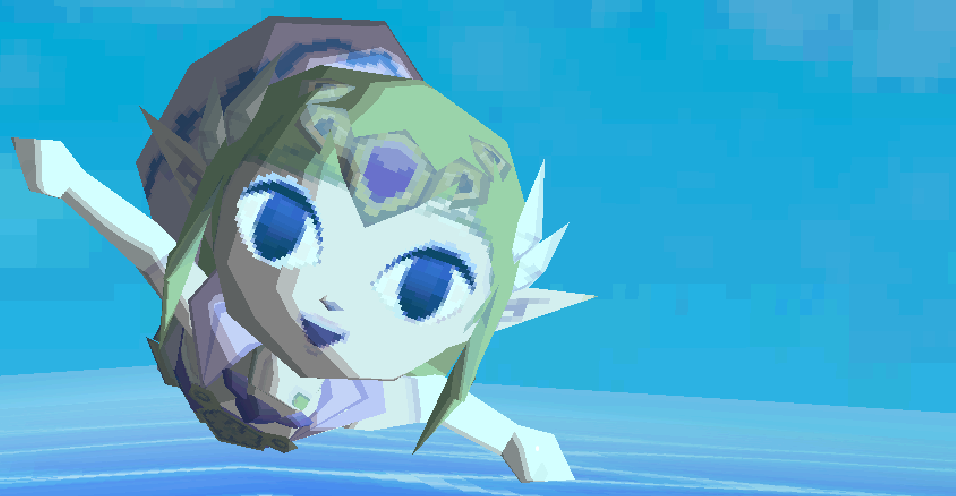 Two years ago, I declared that Nintendo DS was entering a golden age with several new emulators ready to challenge the established normal.While I'm by no means declaring the other emulators I

I don't even know what to say about this game. The Wii version of, NASCAR The Game: Inside Line is one of the most interesting games I've ever played. It cost me ten